Posted on June 28, 2013 by thewaywardcyclist

I determined that my Sidi’s were not going to last another season and thought the S-Works would be a nice return to innocence. After all, the Specialized “Pro” model from 2000 was my first real road biking shoe. Around the turn of the century, Specialized was advocating a different type of bike-wear product. They worked with scientists, physical therapists, kinesiologists and tried to create new products that looked slightly weird and different, but touted (and justified) the new products as a better fit than anything they’ve ever used in the past. They called this ‘Body Geometry’. Those old pair old first generation ‘Body Geometry’ shoes that I probably purchased from around $150 had such a nice insole that when I got a new pair of shoes I decided I would keep the insole. Then I wore out those shoes and portage the insole to the new shoes…. a trend that continued to today. I don’t know exactly how many miles, km, or watts have been pushed down on them, but it has to be somewhere over 60,000 miles.

Specialized has been pushed into a bad spot this year after they thought they could count on a Chinese manufacturer to produce their top-end road shoes. The same shoes that would be used in the Tour de France and by discerning customers. The first batch turned out ok, so Specialized was able to put the 2013 S-Works Road Shoe out to market around September 2012. Sometime around November or December they were impossible to find in the US. The trend continued through the winter… and the spring.

Turns out, China was up to their old tricks of turning out the best possible initial quality, then following up (once contracts and mass production ensues) with mediocre quality. I was disappointed to find it impossible to find an S-Works shoe after searching for over 6 months… but I applaud Specialized for seeing the mediocre product and determining that it wasn’t good enough. In my head, there is a corporate meeting at Specialized where they have the sloppy Chinese shoe in hand, and they say “Can we charge $400 USD or 350 EUR for this?” Only the imagination can say what came next, but apparently Specialized turned back the order from the manufacturer while customers waited, and waited, and waited.

Dear Specialized,
Are you having a good experience with Chinese manufacturing your top end shoe?
Saving money, though. Nice! China gets the product to the consumer just the same as USA, France, or Italy. Right?
Oh.
Awkward.
I'll step away now.

So I got my hands on the 2013 Version 2 shoe, after they denied the second batch from China. It’s a nice shoe. It’s very light, which is partly why I purchased it over other shoes. Some have said that it feels fragile. I think any light shoe will “feel” fragile. But bits of durability in the right place can go far. Looking at the shoe, I noticed that the toe bumper was very subtle. Experience tells me that a big toe-bumper is good thing.

Next is the heel cup. It feels fine riding. Very good infact. But my old Sidi’s have a plastic heel cup and it’s full of crazy scrapes and gouges. The outer heel cup doesn’t feel as robust as a Sidi shoe, but it’s hard to tell if that is a long-term issue.

The BOA system is really awesome. I’m a big fan already. It does have a shelf-life, but apparently it’s easy to replace and very light compared to strap systems. I’m also thinking that my next MTB shoe will certainly be BOA. Sure, road bike shoe velco may dislatch from time to time, but mountain biking in the mud pushes the limits of velcro. Since laces cannot be adjusted on the fly, the BOA system seems ideal. 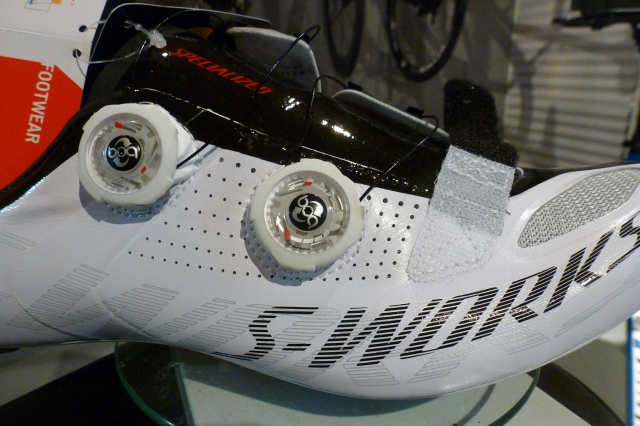 Looks.
We’ll start the least interesting part. I ordered the black/white version only because the red/white version reminded me too much of blood, or lipstick, or roadkill, or fresh roadkill with lipstick. Hard to say. The black/white version has a big black streak down the middle of shoe. I think it probably looks fine from afar and maybe it’s because I’ve had white shoes for so many years… but I didn’t like the black highlights. I also smelled a fresh skunk on my first ride… maybe because it thought the S-Works were a posh relative.

Size.
Specialized, and most notably several forums, say that you should order 1 EU size down for the newest S-Works shoe if you are coming from Sidi (or perhaps another brand). I tried going 1 size down and it wasn’t even close… way too small. In the end, I ordered the same size as my Sidi shoes and it seemed like a good fit.

Weight.
Yup, these are some light shoes. I did a lazy 62 mile ride in 3hrs 2 minutes and was feeling bad from the start but I did notice the weight. At over 400 grams lighter than my old Sidi shoes (Genius 5.5 or something) it was most noticeable on acceleration. 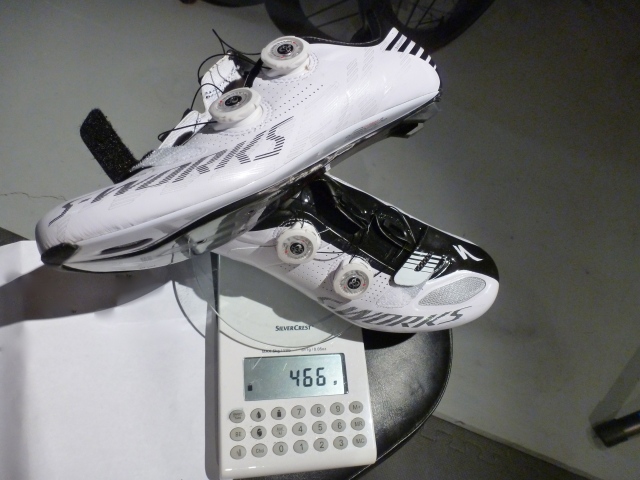 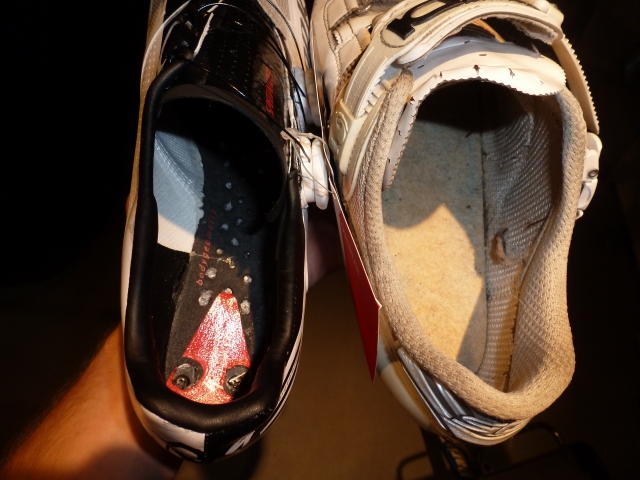 The footbed is tiny. Think ballerina shoe. Think European ballerina. Oh wait. Come back. Yes, it’s svelte but I don’t have wide feet and they are very low profile too. I’ve been using 2 footbeds in every cycling shoe to date just to raise my foot to the appropriate level. Maybe this could be good? 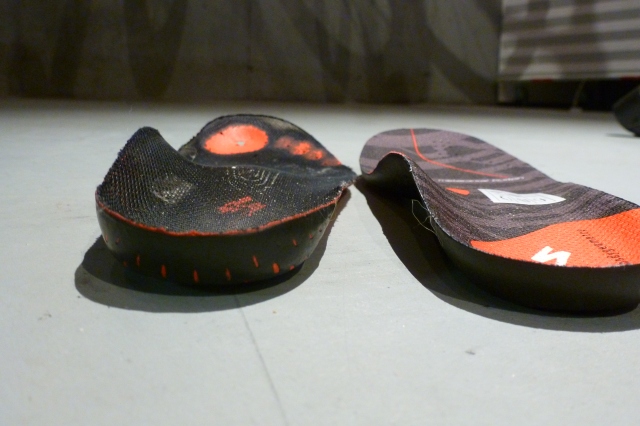 I have flat feet. It’s generally not an issue but the lack of arches can get one out of a wartime draft so I’m sticking with them (you never know). The old Specialized footbeds worked well for me. I really liked the raised section in the middle of the foot just before the toes. As long as I don’t have any ankle swelling this insole is great for me. However, the newer S-Works insole has very little raise (if any) and it’s also pushed back onto the center of the foot. 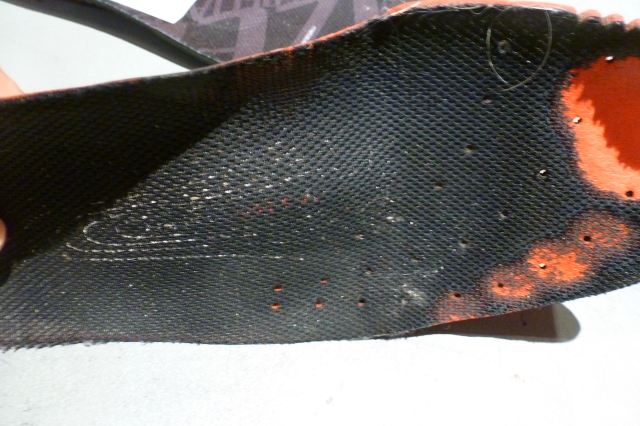 The Ride.
It was apparent early that the narrow footbed wasn’t working for me. It felt as though the shoe was trying to take something flat and form it into something tubular.

I realize now after seeing the S-Works design that my flat feet make me a bad candidate. The quality of the unidirectional carbon sole is great! The upper material is very supple but the BOA system keeps it from being flexy. Both big wins! Some companies have better systems to prevent damage to the shoe with plastic outer heel cups or bigger toe bumpers but for riders who don’t have issues with heel rub on the chainstay or bump toes from time to time. The 2013 S-Works shoe (or is it the 2014 shoe now with the difference in manufacturing?) it’s an exquisite shoe. If I had arches… I’d order a second pair.

The Verdict:
I’ve decided it’s not the shoe for me. Although I hate the look of Bont shoes (they look like little boats don’t they?) I think that’s where I’m headed. The ugly flat shoe for the ugly flat foot seems like a “Beauty and the Beast” story ending so thats where we’ll leave it.

This entry was posted in Equipment & Parts and tagged review, s-works, shoes, specialized. Bookmark the permalink.